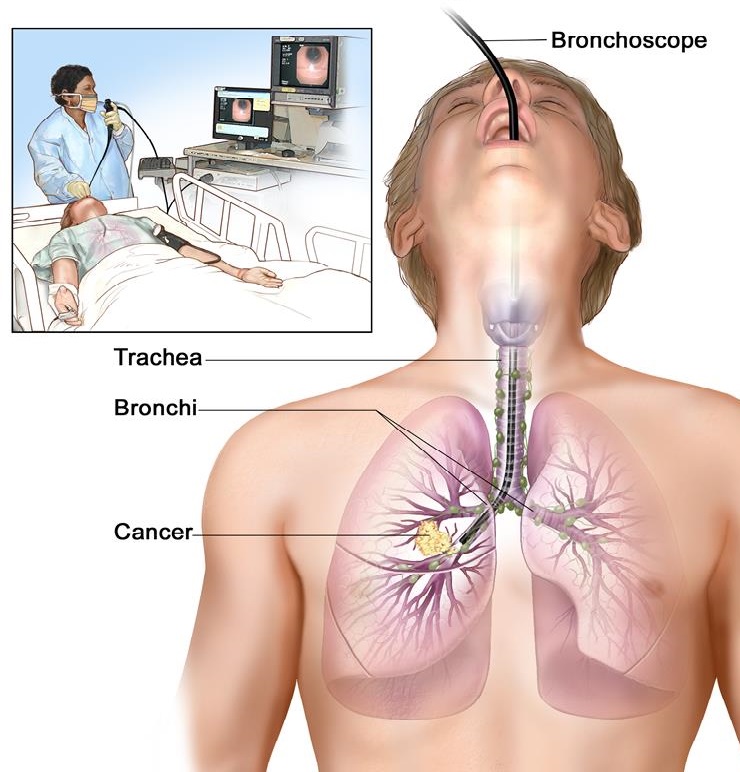 Bronchoscopy is the most common interventional pulmonology procedure. During bronchoscopy, our physician advances a flexible endoscope (bronchoscope) through a person’s mouth or nose into the windpipe. The doctor advances the bronchoscope through the airways in each lung, checking for problems. Images from inside the lung are displayed on a video screen.

The bronchoscope has a channel at its tip, through which a doctor can pass small tools. Using these tools, the doctor can perform several other interventional pulmonology procedures. 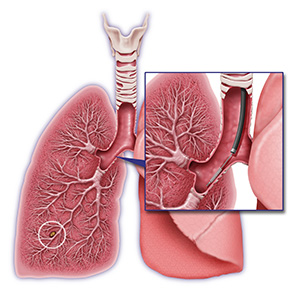 Biopsy of lung or lymph node

During bronchoscopy, our physicians may collect a small piece of tissue from either the lung or a nearby lymph node. Doctor can use a needle or forceps advanced through the bronchoscope to get a sample of tissue. Biopsies can detect cancer, infection, sarcoidosis, and other conditions.

For people with lung cancer or other cancers, interventional pulmonology biopsies can often accurately identify spread of cancer into lymph nodes. This can prevent unnecessary surgery or help determine the best choice for treatment. 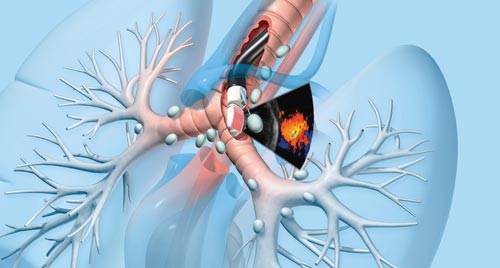 An ultrasound probe on the tip of a bronchoscope allows a doctor to biopsy lymph nodes with more precision. EBUS allows physicians to perform a technique known as Transbronchial needle aspiration (TBNA) to obtain tissue or fluid samples from the lungs and surrounding lymph nodes without conventional surgery. The samples can be used for diagnosing and staging lung cancer, detecting infections, and identifying inflammatory diseases that affect the lungs, such as sarcoidosis or other cancers like lymphoma. 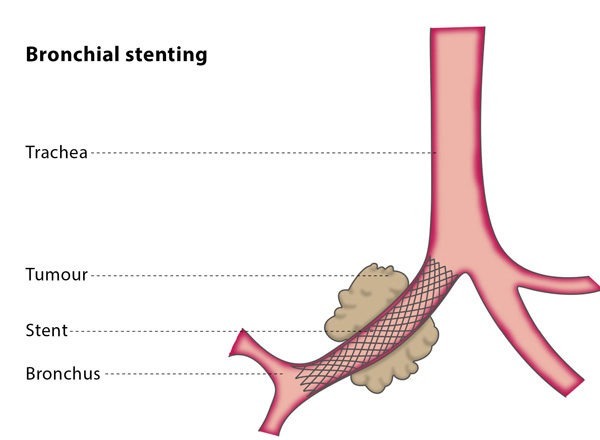 Advanced cancer or certain other conditions can constrict or compress an airway tube (bronchus). If the bronchus becomes blocked, difficulty breathing, cough, and pneumonia can result. Using a bronchoscope, our physicians can advance a wire mesh stent into a narrowed airway. Expanding the stent can open a bronchus and relieve symptoms caused by the constriction.

Thermoplasty is an interventional pulmonology procedure for certain people with severe asthma that can’t be controlled with medications. During bronchoscopy, our phycician applies a controlled, therapeutic radiofrequency energy to the walls of the airways. The heat destroys the smooth muscle layers whose constriction contributes to asthma symptoms. 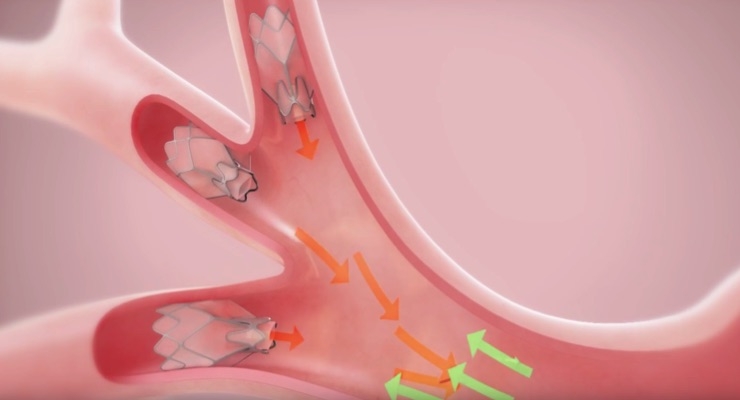 An endobronchial valve is an implantable medical device—a small, one-way valve, which is implanted in an airway in the pulmonary system to treat one of several lung conditions. The one-way endobronchial valve is typically implanted such that when a patient exhales, air is able to flow through the valve and out of the lung compartment that is fed by that airway, but when the patient inhales, the valve closes and blocks air from entering that lung compartment. Thus, an implanted endobronchial valve typically helps a lung compartment to empty itself of air. This has been shown to be beneficial in the treatment of emphysema, where lungs lose their elasticity and thus cannot contract sufficiently to exhale air, leading to air trapping and hyperaeration. When one or more diseased portions of an emphysematous lung are made to deflate and collapse, other healthier portions of the lung have more room in the chest cavity to inhale and exhale, pressure is removed from the diaphragm, and even the heart may function better as the hyper-inflated lung becomes smaller.

Endobronchial valves have also been shown to be beneficial in treatment of persistent air leaks in the lungs.

Endobronchial valves may be the first successful medical device treatment of emphysema, a disease being managed traditionally by lung transplantation and/or lung volume reduction surgery (though some patients do not meet the eligibility requirements for one or both of these invasive procedures). Endobronchial valves are typically implanted using a flexible delivery catheter advanced through a bronchoscope, and thus they are minimally invasive. The valves are also removable if they are not working properly. When properly used and correctly implanted, endobronchial valves have been shown to improve patients’ ability to breathe, walk, exercise and perform their daily activities.

The endobronchial valve has these features: 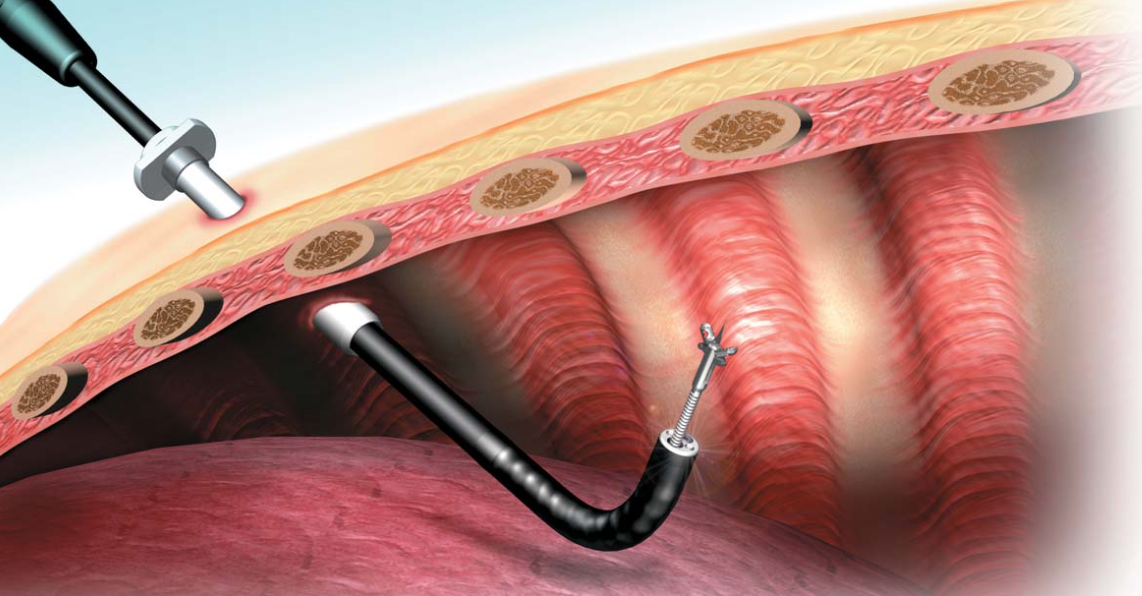 Medical Thoracoscopy is a minimally invasive procedure that allows our physicians to examine the pleural lining of the lungs and the surface of the lungs. Internal images and video obtained from this technique help doctors identify signs of pleural mesothelioma such as inflammation, pleural plaques and pleural thickening.

Medical Thoracoscopy can be used to look at an abnormal area seen on an imaging test (such as a chest x-ray or CT scan). It also can be used to take biopsy samples of lymph nodes, abnormal lung tissue, the chest wall, or the lining of the lung (pleura). It is commonly used for people with mesothelioma and lung cancer.

Medical Thoracoscopy can be done to remove excess fluid that is around the lung and causing trouble breathing. This fluid can also be sent to the lab and checked for cancer or infection. If fluid around the lungs is removed, but builds up again, medicine can be put into the chest cavity with a thoracoscope to keep the fluid from coming back (pleurodesis).